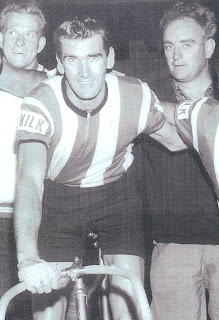 I had the pleasure of meeting this charming man a few times. I will remember him as a very
peaceful person. As I am always interested in the career of retired bikeriders, specially when they raced before the 70s. And Ted was certanly one of them, he started in 1946.
Not that he rang me up to tell me the whole story, not at all. He was a modest man.
My wife, Lieve, and I stayed in West Essendon with Barb and Ron Neiwand (another cycling family), when we met Ted for the first time. Of course tea was served at the Neiwands with enough sweets to sit down and talk about cycling. I must admitt that Ted said a few things, but still he was the most quiet person around the table.
You can imagine my surprise when Ted turned up, two days later, with his scrapbook on his career under his arm.
And then the stories followed. Together with his mate Ron they went full on. I had no time to write everything down.
He started at the Bairnsdale Professional Cycling Club in 1946 at the age of.....14 !! Yes, you read well, at 14 year old he was a pro cyclist.
This got all to do with the strange situation in those days of Australian cycling. You had to make up your mind when you applied for a licence, eather a pro or an amateur one.
So he joined a pro club. Only because his dad and his uncles were members. In 1951 he moved to Melbourne and joined the Footscray Club. Being pro cyclist in those days didn’t mean you didn’t have a job. Ted was a “chippie”. We would call it a carpenter in Europe.
First as a trackrider he became one of the better riders, he teamed with Sid Patterson, John Perry, Clive Middleton in madisons and sixes. 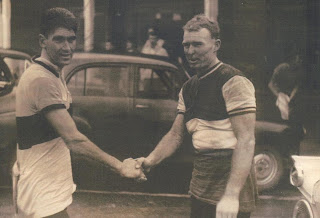 On the road Ted was a scratch rider, which means he was a great rider, one of the best.
In 1957 he started in the Midlands Tour, the race he always wanted to win. The scratch group was only 4 men big. Ted, Russell Mockridge, George Goodwin and Jim Taylor. He always
Believed that,  that was the year he could have won, cause Russell broke away in Blackwood just before they caught the bunch and went through the field to win. If he could have stayed with Mockridge a bit longer, that would have been his chanche.
Bad luck followed Ted several times troughout his career. One of those bad days was when his handlebar snapped during the Warrny 1955. He was in the final, in a group of 6 riders.
Another time, he was co leader on the last day in the 1955 Sun Tour, when he punctured, lost time and never came near John Geddes who won the Sun Tour. 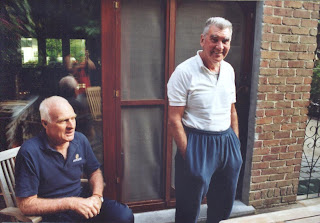 And in 1958 everything went wrong when he was selected for a trip to Europe with an Australian team that was put together by Russell Mockridge. They had a contract for the Giro in 1959. Unfortunatly Russell Mockridge got killed in the 1958 Tour of Gippsland.
That year he also became a fireman.
After he stopped his pro career in 1964 he won gold and silver medals at the World Police and Fireman Games.
Many riders of the next generation knew Ted as their manager in several Sun Tour teams.
A nice man, a great bikerider, i am glad that he came to visit us in 2006 in Ghent.
He was on the road with his mate Ron and stayed a few days in Destelbergen. A beer, a bbq, and again the stories came.

(on both pics, you see Ted with his friend Ron Neiwand, in their race days and in 2006 in Destelbergen)

Ted Harrison past away last tusday, he has had troubles over the last weeks with heart and circulation problems resulting in the amputation of a leg last week.
R.I.P.

Ted was a true gentleman, a quite achiever and a gentle sole. A friend of my parents and they are together sharing a few yarns,as they shared many adventures together. Teddy love is bikes and it was a true passion that ran through his veins. RIP

Teddy and I attended the Lucknow State School as six-year olds before completing our schooling together in Bairnsdale. Joining the Bairnsdale Cycling Club in 1946, we enjoyed the competition, delights and benefits available in all good vital clubs. We moved to Melbourne in January 1950 (Ted to pursue cycling and I to further studies) and shared accommodation at the YMCA in Northcote until it closed down the following year, thence to North Melbourne with my relatives while we both worked for ICI, Deer Park. Ted then went back to carpentry in late 1952 while I joined the Army for a 32 year career. We kept in touch all our lives. Congratulations on your excellent tribute to Ted as a gentleman, cyclist and friend. It is a true summary of a great guy. Leesa Smith (no relation) has also added a beautiful summary. I was privileged to have been invited to join Ted's family at his funeral service held in the Veledrome and to deliver one of the eulogies. It is appropriate to note that his career as a leading fireman was also recognised with a full ceremonial service highlighted by his shiny Assistant Fire Chief's helmet resting alongside his cycle helmet on the casket with his bike propped up in front. He was a champion to so many.